The World Forum on Energy Regulation (hereinafter WFER) was created in 2000 as a cooperative effort by the world’s main energy regulatory associations. Since then, the WFER – held only once every three years – has established itself as the leading international conference on energy regulation. Within this platform, key energy industry players, high-level policymakers, academics, and regulators from all over the world gather to engage in strategic and meaningful conversations on the current issues of the energy sector.

The first WFER (2000) was held in Montreal, Canada, and was hosted by the Régie de l’énergie du Quebec (Quebec’s energy regulator) and the Canadian Association of Members of Public Utility Tribunals (CAMPUT), with the support of the National Commission of Regulatory Utility Commissioners of the United States of America (NARUC). By that year, regional associations such as the Ibero-American Association of Energy Regulatory Entities (ARIAE by its Spanish acronym), the Council of European Energy Regulators (CEER) and the Energy Regulators Regional Association (ERRA) sprung up and expressed their interest. As a result, a joint statement was released in which regulators highlighted the need to develop cooperation mechanisms to celebrate next Forum’s edition.

The WFER II (2003) was held in Rome, Italy, and hosted by the Regulatory Authority for Electricity and Gas of Italy with the support of CEER and the European Commission. During this Forum, regulators planned the creation of the International Energy Regulation Network (IERN), a web-based platform to exchange regulatory information, with the support of the Florence School of Regulation (FSR) and financed with European funds.

The WFER III was hosted by NARUC in Washington D.C, United States in 2006. The IERN platform was launched and regulators pledged to take on active roles to keep it updated. This new space enabled exchange of mutually beneficial information to better understand market trends and regulation by means of international cooperation amongst energy regulators.

As part of the WFER VI, the International Confederacy of Energy Regulation (ICER) was officially constituted on October 19, 2009. That edition of the Forum was held in Athens, Greece and hosted by the Greek Regulatory Authority for Energy (RAE) and supported by CEER.

It is important to point out that the WFER is the platform that gave rise to the formation of ICER, as regulators understood the usefulness of institutionalizing energy regulatory cooperation worldwide. CEER deserves particular mention for encouraging this initiative.

At the time of its establishment, the ICER founders were 11 national and regional energy regulatory associations:

The first Chair of ICER (2009 to 2012) was John Mogg, at that time the CEER Chairman and to the Office of Gas and Electricity Markets of Great Britain (OFGEM). In light of his role, CEER assumed the role of the Technical Secretariat of ICER.

During this time, ICER focused on four key topics: reliability and security of supply, climate change, competitiveness and affordability, and regulatory best practices. 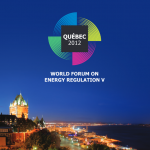 At the WFER V, held in Quebec, Canada (2012), and supported by CAMPUT, John Mogg was unanimously reappointed Chair to ICER and CEER continued with the Technical Secretariat activities.

David C. Boyd from NARUC (Commissioner of Minnesota) and John Betkoski from NARUC (Vice-Chairman to Connecticut’s Commission) were elected Vice-Chairs.

During the WFER VI, held 2015 in Istanbul, Turkey, hosted by the Turkish Energy Market Regulatory Authority (EMRA), and supported by ERRA, Alparslan Bayraktar, Chair to ERRA and EMRA’s Commissioner, took on ICER leadership. ERRA then functioned as Technical Secretariat.

In 2016, Bayraktar was appointed General Director to the Turkish Ministry of Energy. At this time, Vice-Chair John Betkoski assumed ICER’s leadership supported by NARUC as Technical Secretariat. 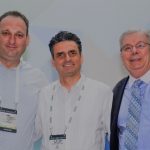 2018 – 2021
During the WFER VII, hosted by Mexico’s Energy Regulatory Commission (CRE by its Spanish acronym) in Cancún, México (2018), ICER members elected Daniel Schmerler, head of the Peruvian regulator, and at that time Chair to ARIAE, as ICER’s leader.

Since this time, Peru’s Supervisory and Regulatory Agency for Investment in Energy and Mining (Osinergmin by its Spanish acronym) has fulfilled the Technical Secretariat position

Two Vice-Chairs were elected: David Danner from NARUC (Chairman to the Washington Commission), and Susana Cazorla from ARIAE (CRE, Mexico) who was reelected (standing Vice-Chair until October 2019)

The three key topics identified for the upcoming Forum are: electricity, gas and other fuels, and technology and innovation. These correspond to the Virtual Working Groups.

In 2018, the Regional Association of Energy Regulators for Eastern and Southern Africa (RAERESA) joined as a new member.

In February 2020, Commissioner David Danner assumed the role of Chair of the Confederation.

On October 21st, 2019, the then Chair of ICER, Daniel Schmerler, and the representatives of the different associations gathered in Lima, Peru, to commemorate ten years of the foundation of ICER, reflect upon the direction of the Confederation, and start the international coordination of the VIII WFER (Lima, Peru, 2022).

On that occasion, Peru shared its vision on the Confederation: 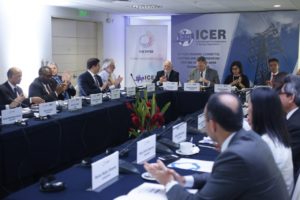 Represent, to position ICER as the global network of energy regulators.

Institutionalize, to consolidate ICER’s governance and be consistent over time.

Systematize, to be efficient and produce quality information for decision making.

As a result of the meeting the Steering Committee supported this approach and committed to: